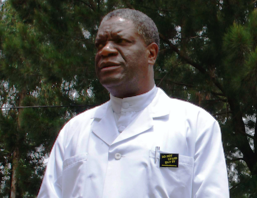 Congolese doctor Denis Mukwege and Nadia Murad, former captive of Islamic State turned global advocate, were awarded the Nobel Peace Prize for their work against sexual violence. The prize was awarded for “their efforts to end the use of sexual violence as a weapon of war and armed conflict,” the Oslo-based Norwegian Nobel Committee said in a statement Friday.
“Both laureates have made a crucial contribution to focusing attention on, and combating, such war crimes.”
Mukwege, 63, is the medical director of Panzi Hospital in Bukavu, the capital of South Kivu province in eastern Congo, which has been blighted by more than two decades of conflict.
He founded Panzi in 1999, a year after a war erupted between Congo and neighboring Rwanda that eventually spread to engulf half a dozen African countries. The hospital offered obstetric care and treatment for severe gynecological problems. Among its patients are victims of sexual violence, a hallmark of Congo’s conflict. 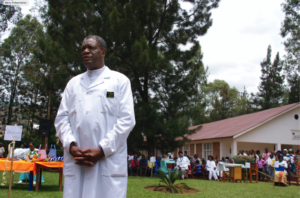 Murad, a member of the Yazidi minority in Iraq, was captured by the Islamic State as it overran villages in the Sinjar district. The Nobel committee said several hundred people were massacred in Murad’s village and she was captured and repeatedly subjected to rape and other abuses.
She managed to flee after three months and has since become a global spokeswoman on sexual- violence issues. In 2016, she was named the United Nations first Goodwill Ambassador for the
Dignity of Survivors of Human Trafficking. Mukwege and Murad have long been contenders for the prize,
awarded in a year when women have raised their voices against sexual harassment and assault as the so-called MeToo movement swept the world. A flood of allegations of sexual misconduct
followed the initial claims of sexual assault that toppled movie mogul Harvey Weinstein. Powerful men in media, politics and entertainment have since lost their jobs, including CBS boss Leslie Moonves and U.S. Senator Al Franken. Allegations are also swirling around current Supreme Court nominee Brett Kavanaugh,
which he has denied. Last year’s prize went to the International Campaign to Abolish Nuclear Weapons. Past winners include former U.S. President Barack Obama and civil rights leader Martin Luther
King Jr. The peace prize, along with awards in literature, physics and medicine, was created by Swedish industrialist Alfred Nobel and first awarded in 1901. The economics prize, set to be revealed on Monday, was instituted by the Swedish central bank.
There were 331 candidates for the Nobel Peace Prize for 2018, including 216 individuals and 115 organizations. The Norwegian Nobel Institute doesn’t disclose the names of nominees
until 50 years have past. The deadline for nominations is Jan. 31.