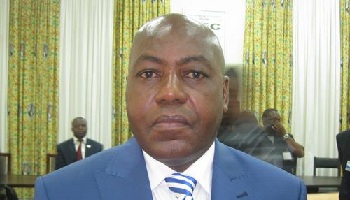 The Democratic Republic of Congo won’t eopen debate on its new mining code and regulations despite ongoing criticism from producers, said Mines Minister Martin Kabwelulu.
The process to revise mining rules in the world’s top cobalt producer has ended and it’s now in the implementation phase, Kabwelulu said in a statement read out by Mines Ministry Secretary General Joseph Ikoli at an industry event in Cape
Town.

* Congo revised the mining code because it wants to put an end
to the “natural-resources curse,” Kabwelulu said, referring to
mineral-rich countries with poor populations.
* His insistence that the code won’t be revisited may disappoint
producers after the election of opposition candidate Felix
Tshisekedi as president in December.
* Still, Tshisekedi has yet to appoint a new cabinet, so it’s
unclear whether Kabwelulu’s comments are the final word on the
matter.

* Barrick Gold Corp. Chief Executive Officer Mark Bristow
repeated criticism of the new rules, accusing the government of
“short-termism.”
** To attract investment, “the way to do that is to have a long-
term plan, not to wake up every now and then and decide to
harvest a little bit more from the people that are already
there,” he said.
* An executive from a local unit of China Molybdenum Co., which
owns Congo’s biggest copper and cobalt mine, Tenke Fungurume,
said the company faces “many challenges as a result of the bad
business environment” in Congo.
** “We would like to propose a win-win solution to the new
government,” said Andre Kapanga, executive general manager of
CMOC Congo.