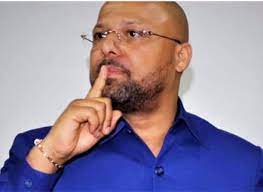 – A top aide to Democratic Republic of Congo President Felix Tshisekedi has resigned after a series of secretly-taped videos were released that appeared to show him negotiating a corrupt mining deal.

Vidiye Tshimanga, Tshisekedi’s strategic adviser, allegedly told people claiming to be mining executives that he could protect their investments in return for a stake in their unnamed project, according to the videos released Sept. 15 by the Organized Crime and Corruption Reporting Project. The London-
based OCCRP said it didn’t know the source of the videos but Tshimanga had verified the meetings they portrayed took place.

Tshimanga told Tshisekedi in a letter on Sept. 16 that his remarks were taken out of context but it was his “ethical obligation” to resign.
“The wound being unfortunately too open at this stage, this appears to me to be the only dignified decision,” he said in the letter, which was confirmed by the president’s office. Tshimanga
told Tshisekedi he had a full recording of the encounters that would contradict the videos, which included excerpts of three separate meetings which were conducted in-person and online, and
edited together.

Anti-Graft Fight
Tshimanga didn’t respond to messages from Bloomberg News requesting comment. Tshisekedi declined to comment through a spokesman. Congo has some of the world’s richest deposits of copper,
cobalt, gold and diamonds, but ranks as one of the most difficult places to do business. Tshisekedi, who came to power in 2019, has made the fight against corruption one of the centerpieces of his administration.
In the videos, Tshimanga said Tshisekedi himself doesn’t do business, but that he represented the president. “If we do business together, I will take my — how you say that — my percentage of the investment,” he said in English. OCCRP reporters were unable to determine who taped the
videos, which were “leaked” through an intermediary, the article said.
“Despite the lack of clarity on who filmed the videos and why, OCCRP decided to report on them because Tshimanga himself confirmed the taped encounters took place,” it said.